﻿Recently I've been having a craving for a blueberry dessert that my mom used to make often when I was growing up. It was one of our favorite desserts but I haven't had it in a long time.
So I went to my favorite recipe site - Allrecipes.com - and found what seems to be the exact same recipe - Blueberry or Cherry Dessert.

I thought it turned out really well and Michael LOVED it. He kept sneaking back to the kitchen and getting more after dinner. He called it his ice cream cone.

Here is a not so great picture but it was the best I could do since the light in the kitchen isn't great for pictures. 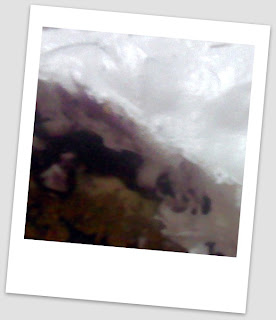 Oh, I almost forgot, I did run into one problem with this recipe. The original recipe calls for 36 graham crackers. That makes way to much crust and I had to put half of the crumbs back for another time.
Posted by Rose @ Walnut Acre at 7:19 PM

Email ThisBlogThis!Share to TwitterShare to FacebookShare to Pinterest
Labels: Homemaking, In the Kitchen, recipes