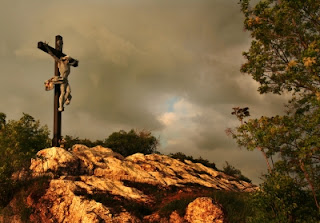 I wrote yesterday about one of the topics that were talked about in our Sunday School class that morning. And though I found myself very fascinated with Joel 2:13, I did manage to catch a few other things from the discussion (and even join in a little.)
Here is another thought that caught my attention. It was posed as a question.
Who was the most sinful man on earth?
I can think of a few people who seem like candidates for that list -Adolph Hitler or Jeffrey Dahmer seem like they could go on that list. Their crimes against humanity were horrible, their sins were about as black as I can imagine sins to be.
But neither of them were even mentioned.
Because the greatest sinner on earth - was Jesus.
For that period of time, when He hung on the cross, He took all the sins of the world on Himself. For that interval He bore the sins of Hitler, Dahmer, and every other person who ever was, is or will be upon Himself.
Can you imagine the weight of all those sins? No wonder there were several hours of darkness, with all those sins in one place.
And He took on the punishment for all these sins freely, with an all consuming love for the sinner. And our part of the bargain? - Receive the gift. Receive the gift of forgiveness, of our penalty being paid.
What an awesome gift at such an awful price.