I've been thinking for some time that I would like to learn to knit. When I was a kid I did a little knitting but than I dropped it and never did anymore. So several weeks ago I bought knitting needles. I had lots of yard here that I keep on hand for the kids crafts and projects that I thought would be fine to practice with. Sunday I decided to get it all out and get started. Austin had a friend visiting that day and when he saw what I was doing he wanted to learn to. So both of us with a knitting needles and yard began trying to follow the instructions on a video we found on YouTube. We struggled and struggled and finally I decided to try another video and see if we could follow it better. Then second video was much better and we were off.
So far I've just been practicing. The main thing I need to work on is keeping the tension the same as I knit. Right now my stitches get to loose and then to tight and then back to loose again. Here is what I've done so far. 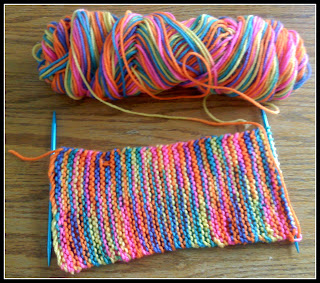 Here is where I saw a slipped stitch and instead of unraveling back to that point I just picked it up again and went on. If I were making something special I would have unraveled it back to that point but I decided it wasn't worth it just for a practice piece. 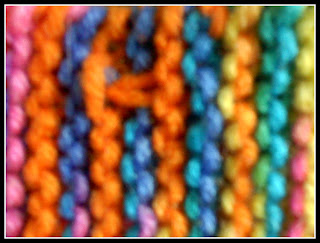 Amanda (my 12 year old daughter) rolls her eyes when she sees me knitting. When I ask her what's wrong she says she's afraid I'm going to end up becoming a little old lady sitting in her rocking chair just rocking and knitting all day long. I have to say it sounds kind of pleasant to me.
And now, because I am on vacation this week and have the free time to do it, I am going sit in the rocking chair on the front porch and knit.
Amanda is going to love this. 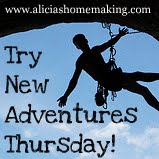