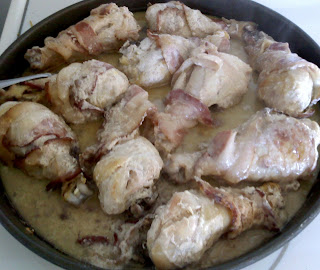 I tried a new recipe today and it was a real success. Of course, most anything with bacon is going to be a success. It's just hard to go wrong with bacon.
As I often do, I adapted a recipe that I read somewhere else, to fit what I had on hand and our tastes. The original recipe was Sour Cream and Bacon Crockpot Chicken. It looks scrumptious and I love that it can be made in the crockpot. However, my crockpot was full of something else so I decided to make our in the oven. Also I had drumsticks on hand instead of chicken breasts. So here is my adapted recipe.
10 bacon slices
10 chicken drumsticks
1 (10 oz) can cream of mushroom soup
1/3 cup sour cream
3 tablespoons flour
garlic salt and pepper to taste
Wrap one slice of bacon around each chicken drumstick and place in pan. Mix together soup, sour cream, flour, garlic salt and pepper and pour over chicken.
Bake at 375 degrees F. Mine were still partially frozen when I put them in the oven and baked them for about two hours.
Enjoy.
We also had baked potatoes for lunch and I spooned some of the sauce over my potatoes for a yummy "gravy."
~ Linking Here ~

Email ThisBlogThis!Share to TwitterShare to FacebookShare to Pinterest
Labels: bacon recipe, chicken recipes, In the Kitchen