Last week was a fun and busy week. Here, in photos is a peek into our week.

Monday - August 27
Christopher and Austin still have lots of fun together every day. Besides hanging out with Austin Christopher likes to play with tractors, cars and trucks. 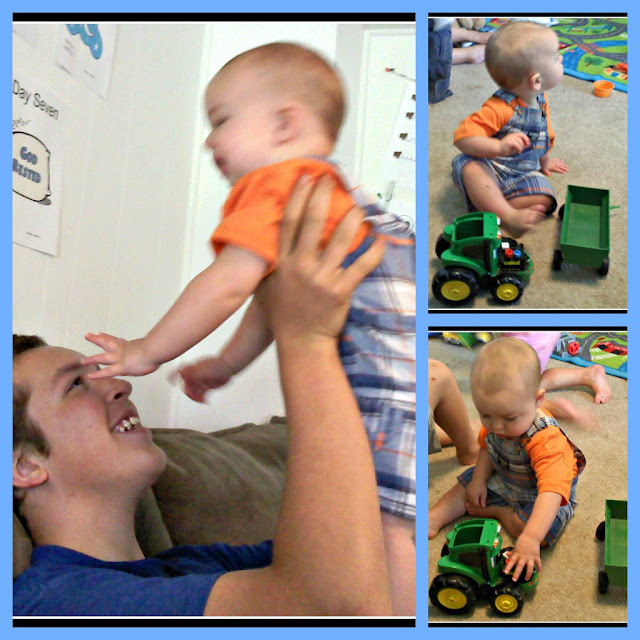 The weather was beautiful and the kids spent a lot of time playing outside. Damien was fascinated watching the turtle, and Gage enjoyed the toy lawn mower. Amanda was taking a lot of these pictures and whenever she gets to take pictures I find lots of pictures of the animals on them. Besides the turtle she also got her dog, Pepper, and her cat, Sheena. 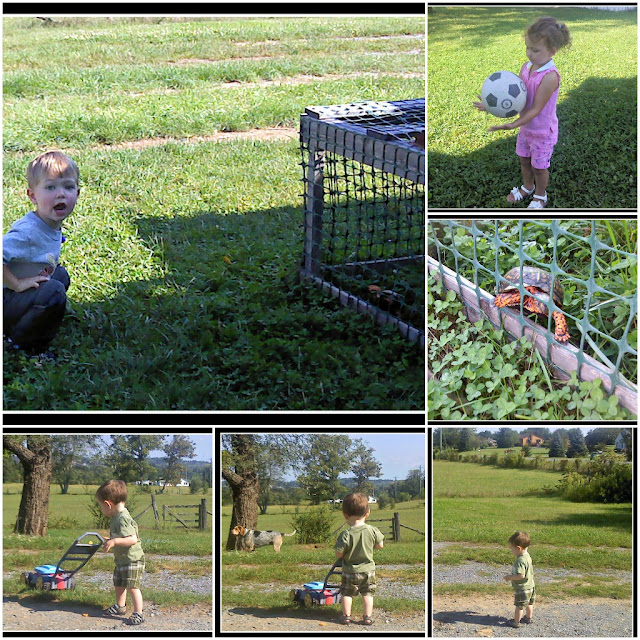 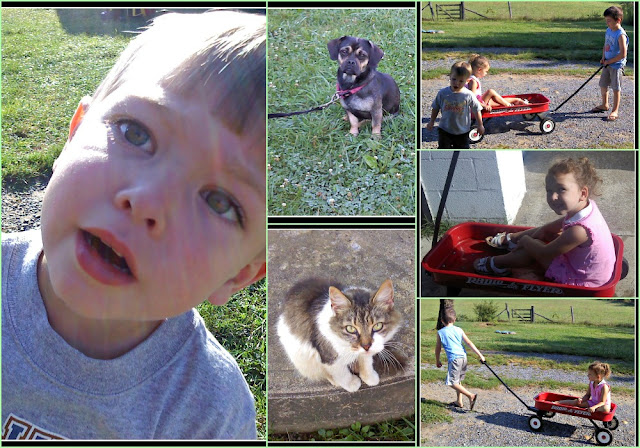 When he got home from work Doug took Michael, Damien and Lauren for rides in the wagon.

Austin pulled weeds in the beans and Amanda and Lauren planted some sunflower plants that Michael had started earlier this summer when he went to camp. 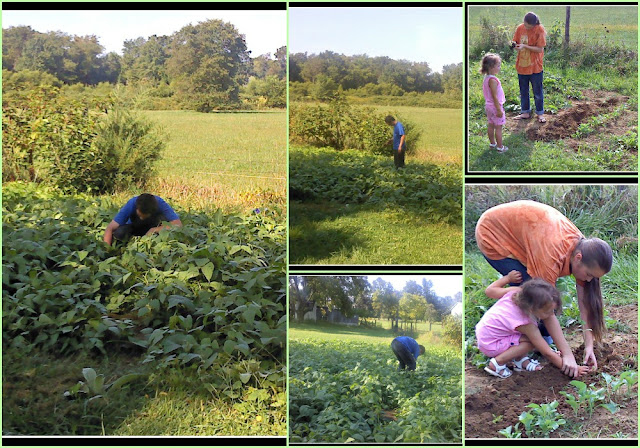 Jam session. We have at least one of these almost every day. 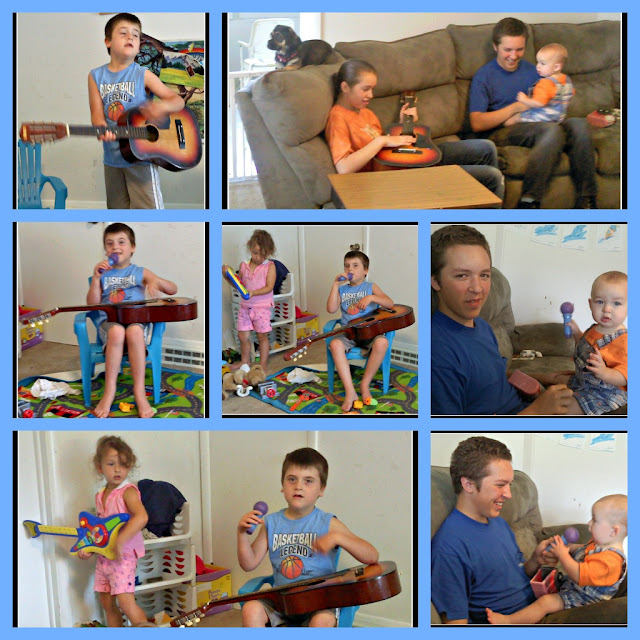 This week we began to PreK/K units - one on the creation story and one based on the book ABC Bunny. Here the kids are doing some of the activities in these units. 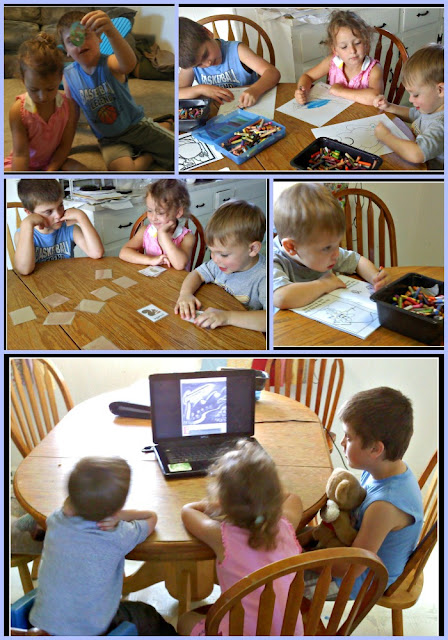 Here CJ is working on making something to hold papers on the table he finished last week. 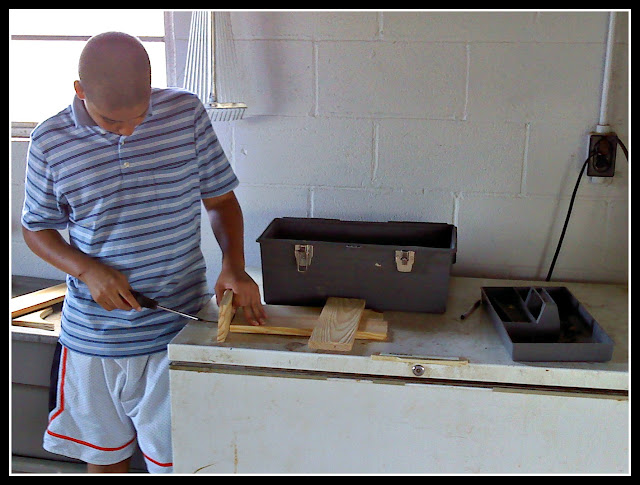 Tuesday
Tuesday morning I made homemade playdough. This kept a lot of the kids busy for over an hour. 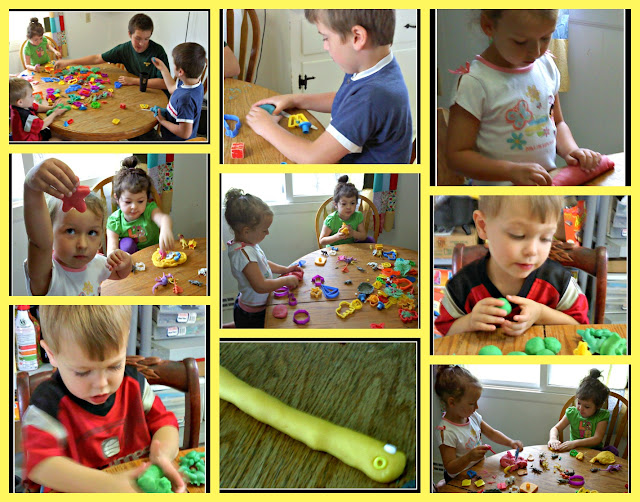 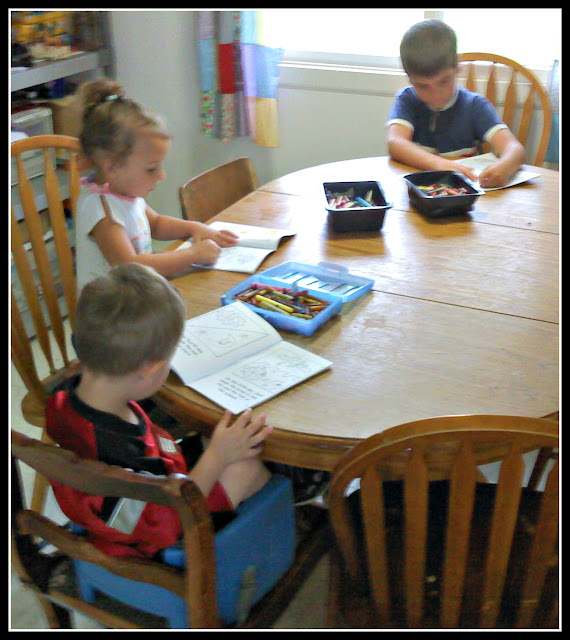 Michael and Scout having a nice moment together. These moments don't come very often because Michael used to scare Scout. Michael is getting gentler and Scout is becoming more tolerant. 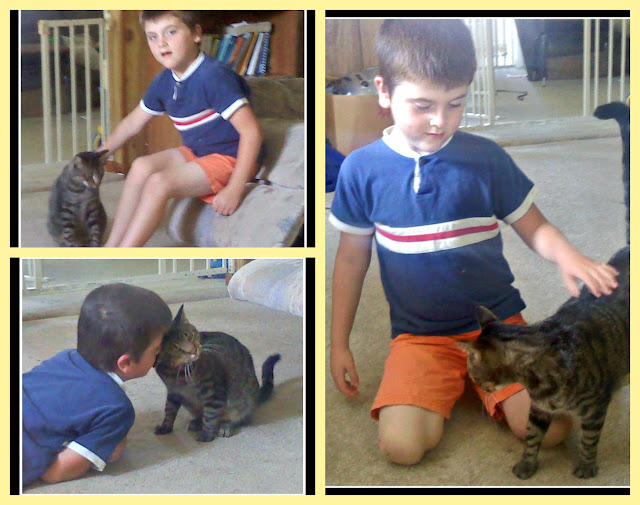 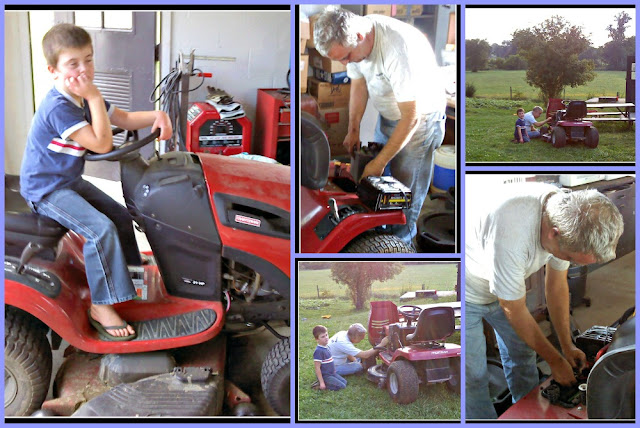 Michael and I both had mishaps that resulted in colorful hands. I spilled blue food coloring on my hands while I was making playdough. Michael was very unimpressed and wouldn't even let me touch him with my blue hands. Later that afternoon I realized I hadn't heard or seen him for awhile so I went looking and found him with hot pink hands. He had gotten into Holly's makeup and completely coated his hands with it! What a mess. And now who has the dirty hands? 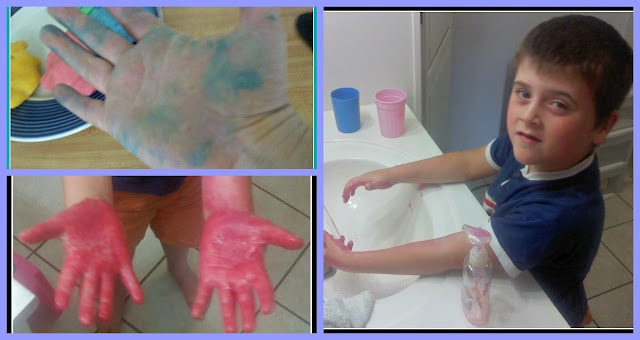 Wednesday
Amanda took Michael and Lauren (and Pepper) for a walk back to the creek. 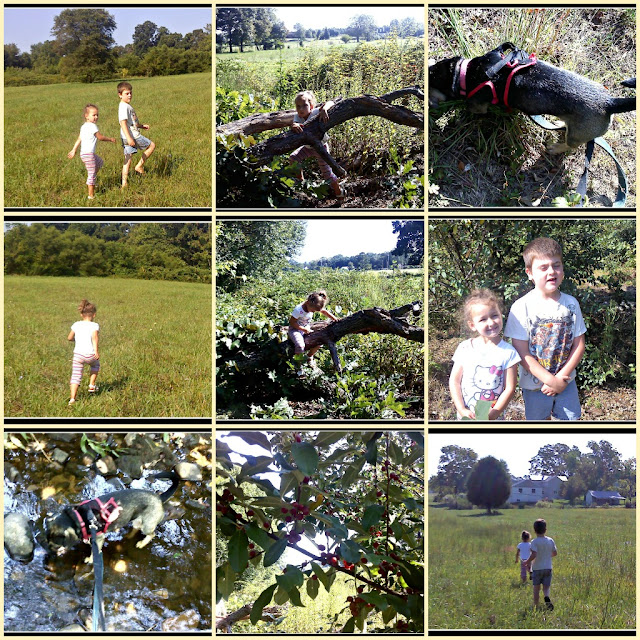 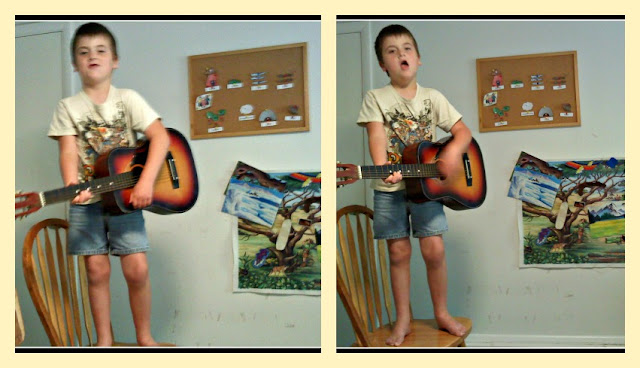 Here we're playing a memory game based on the ABC Bunny story. 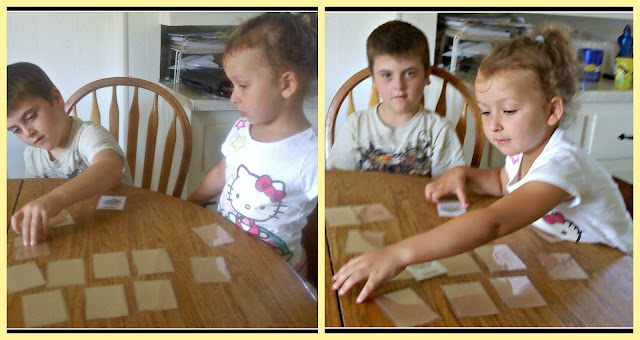 As you can see, wagon rides are very popular. 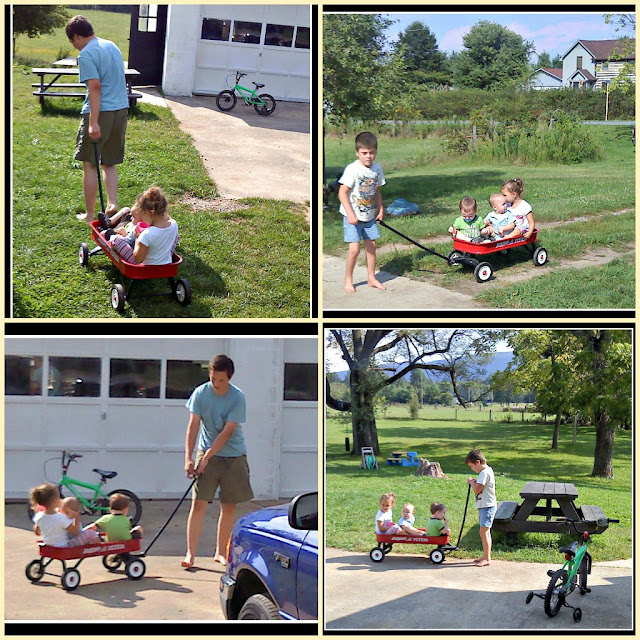 CJ finished his paper holder Wednesday and now it is upstairs on his table full of papers. 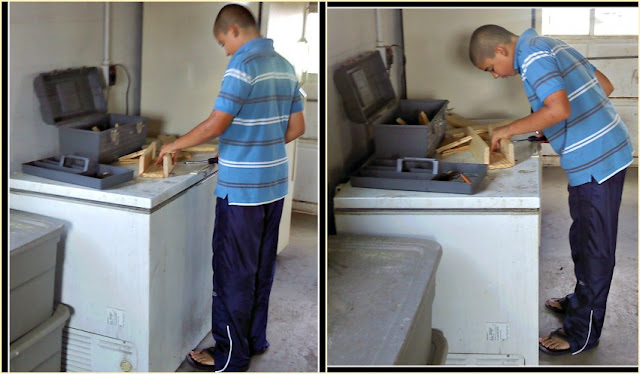 Thursday
Thursday morning the kids went for a walk again. We try to go every day and Amanda has taken over going with them. The younger children stay here with me and Austin entertains them during this time if they need it. The older kids enjoy the walk but some of the younger ones don't like it so much so this works out better for all of us. 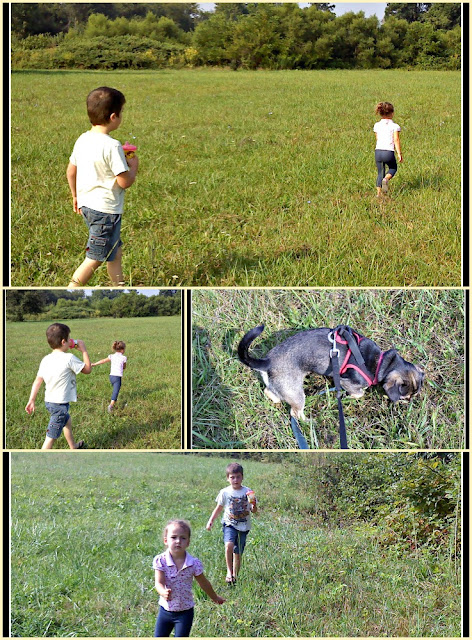 We did some fun papers in our ABC Bunny unit. Most of these activities come from Homeschool Creations Early Learning Printables section. 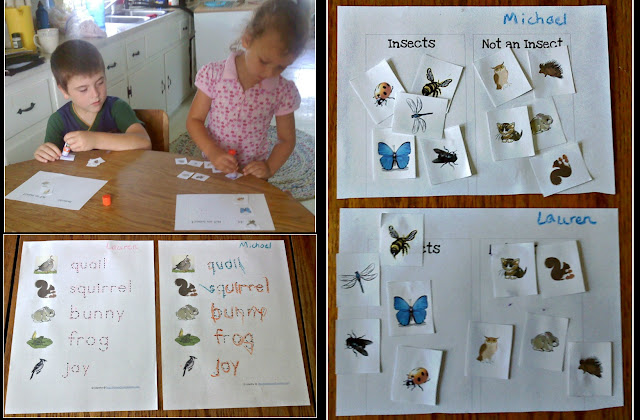 Since CJ finished his paper holder project he decided to start a new one. This time he is making a memory game from cardboard. 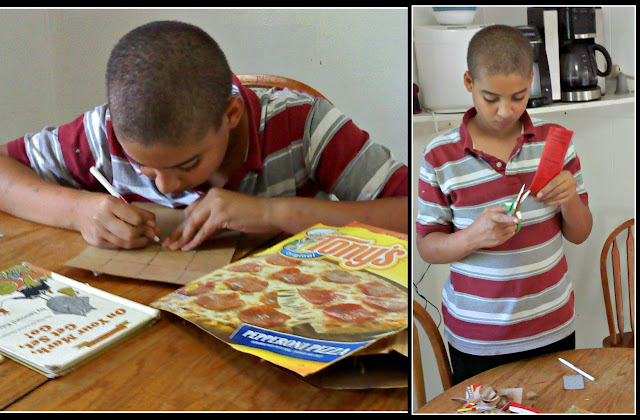 Friday
On Friday we colored pictures of some of the animals in the ABC Bunny story. 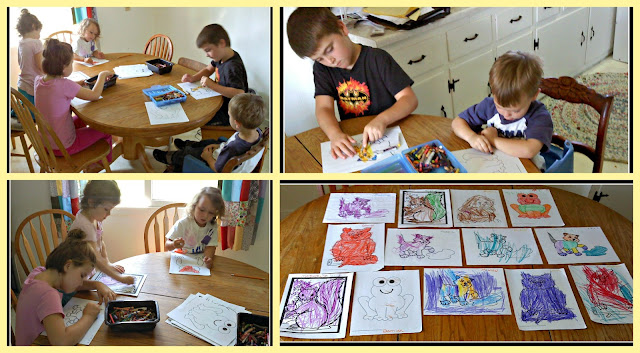 Going for their morning walk. 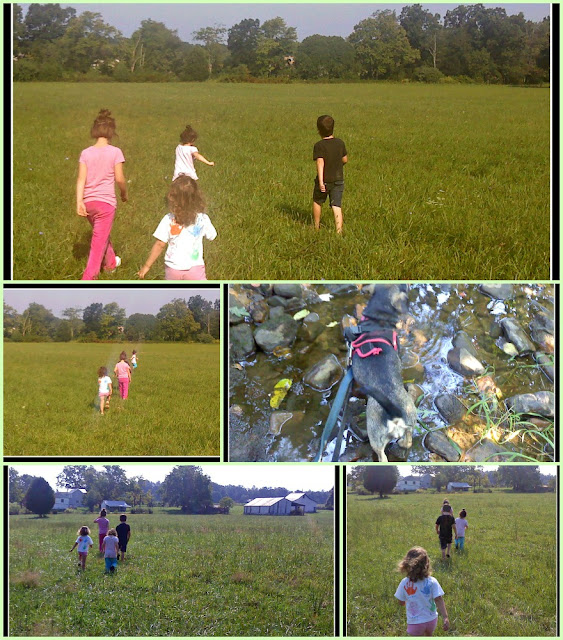 Michael had a doctor's appointment this afternoon. This was basically just a follow up with his pediatrician to make sure things are going okay since his seizure. He is doing pretty well and we decided to leave everything the same for now. He's in the process of getting set up for a sleep study and after that we may look at changing some of his medications. I'd like to see if we can lower the number of meds he takes every day.

Here he and CJ were being funny while we were waiting for the doctor. 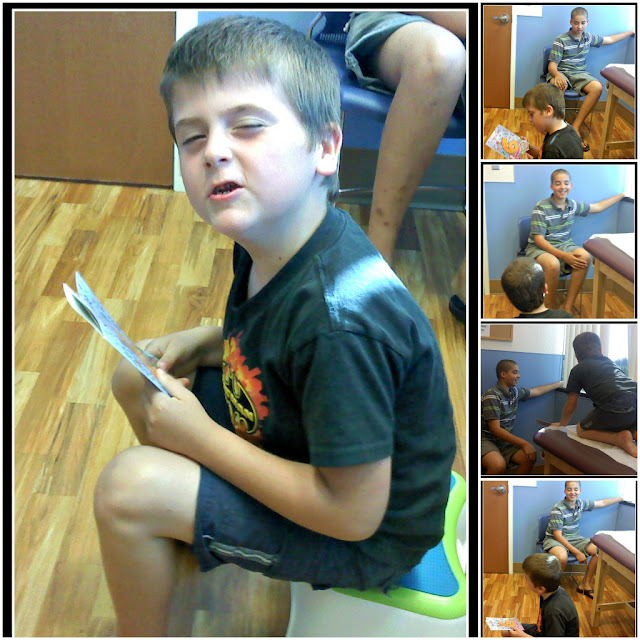 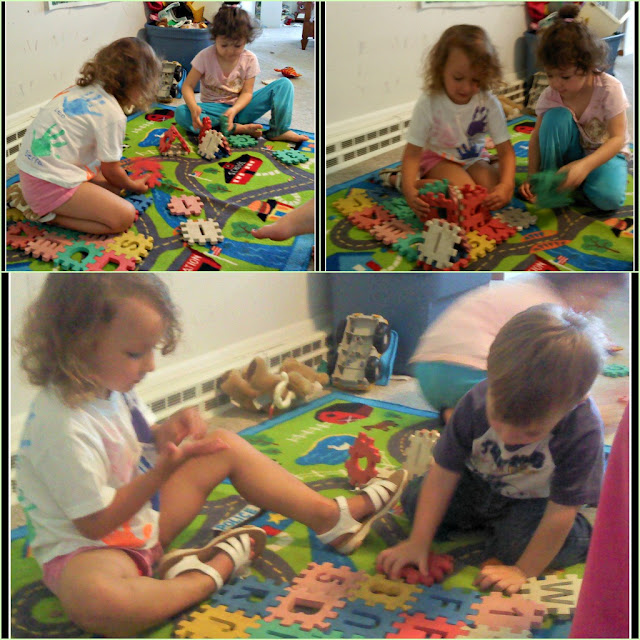 Saturday
Monday is Michael's 6th birthday so today Lauren brought him a birthday cake and a set of walkie talkies. Thank You Lauren and Sarah! He loves his walkie talkies and the cake was delicious. 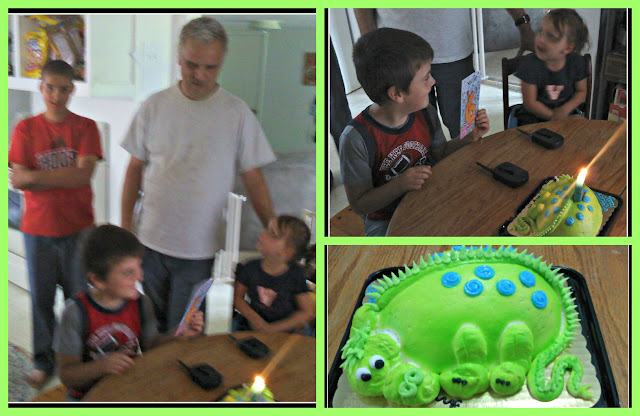 And that's a peek into our week. It was a good one and I'm looking forward to another fun week.