This ended up being one of those days that just seemed to keep taking twists and turns that I hadn't expected. Nothing major, just little things that added up. There were several things I had really hoped to get done today that didn't happen but it's okay. It was still a good day, full of love, learning, laughter and living.

I didn't sleep much last night. Michael was restless and Austin didn't get home from his trip to the beach with my friend and her kids until a little after 1AM. Even after three cups of coffee this morning I was still not feeling very awake. So instead of working on my sewing projects this afternoon I ended up dozing on the couch instead. 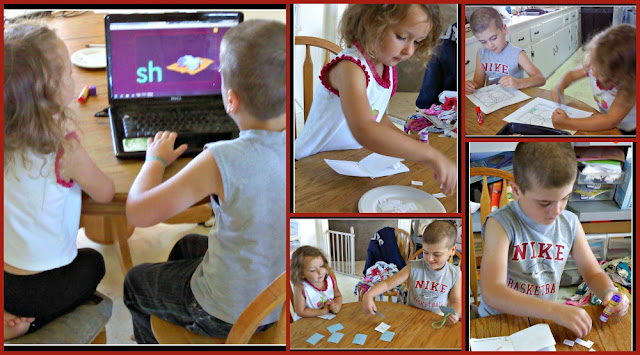 We finished our PreK/K unit on Noah's Ark this morning, and will be starting a new one tomorrow about the Tower of Babel. We also worked on the Doctor/Nurse unit and should finish it tomorrow. And of course, we worked on phonics with Starfall. 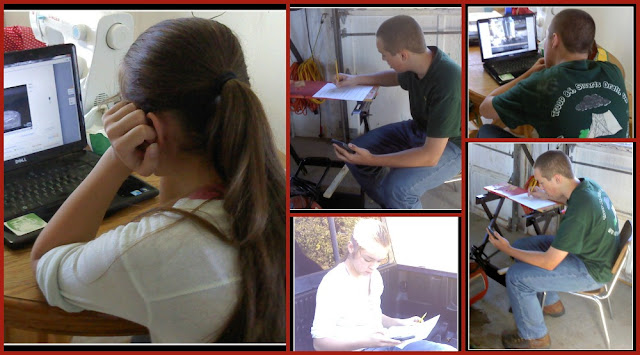 In science today Austin and Amanda studied Physics: Sound Parts 1 and 2. This is an online study. I had to laugh at where they worked on math (decimals) today - Austin in the garage and Amanda on the back of the truck. Our Bible study was Hebrews 10 and for literature we read more from a book Austin was given for his birthday.

CJ had a good day at school today and came home in a good mood. He came in carrying some pictures a friend at school had given him. After he put his things away and had a snack he went out to the field to take pictures. When he came in he colored awhile before it was time to clean up the playroom, hang up his clean clothes and get ready for dinner. 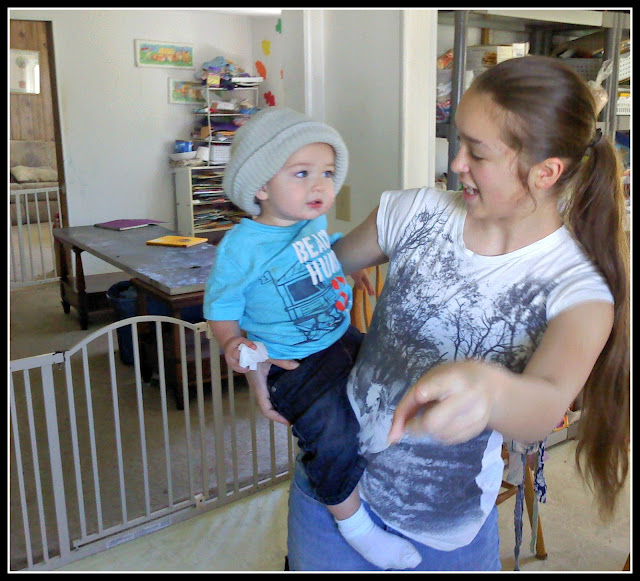 Amanda stuck this hat on Christopher's head expecting him to pull it back off. Instead he kept it on and walked around proudly showing if off. Here Amanda was trying to get him to look at me so I could get a picture but instead he just looked at her like she was crazy.

This evening Michael pulled out a puppet theater we haven't played with in years. It's missing a few pieces but Austin and I managed to get it to stand up and Michael loves it. I'm guessing I'll be watching a lot of puppet shows tomorrow.

And not it's time for me to get some sleep so I can fully appreciate those shows.