Today were Michael's evaluations to see if he needs physical therapy and speech therapy.
So after getting everyone up and fed this morning and then taking one child to preschool Michael and I headed across the mountain to Kluge Children's Rehabilitation Center. We stopped on the way and bought a second breakfast at Hardees, which is a rare treat for us. Since our appointments were at 11:00 and 12:30 and there is no place right there to eat I thought we'd both do better with some food before we got there.
Our appointment with the physical therapist was first. Michael was not in the mood at all to cooperate with her. His answer to nearly every request was "No." No he would not stand on one foot, no he would not try to walk on the balance beam. No, no, no. He did move around enough though doing anything except what he was asked to do at the moment that the therapist was able to get most of the information she needed. One thing of concern that she showed me is ankle
clonus in both ankles. While overall he is certainly in the functional range she did feel he would benefit from some physical and occupational therapy. So after the holidays we will be going once a week for those appointments. We will also be given things to do at home. Our initial plan is to do this for eight to twelve weeks and then see what we need to do from there.
We were finished with that appointment around 11:45 and the appointment with the speech therapist was not until 12:30 so we had some time to fill. One thing I love about KCRC is the playroom they have for children to use while waiting. It is full of fun toys, lots of huge windows, and there is often music playing. Sometimes there are volunteers there to do crafts with the kids if they are interested. I meant to take more pictures of the playroom today but Michael was everywhere while we were there and I was busy keeping up with him. But I did a couple of him playing at the kitchen set. 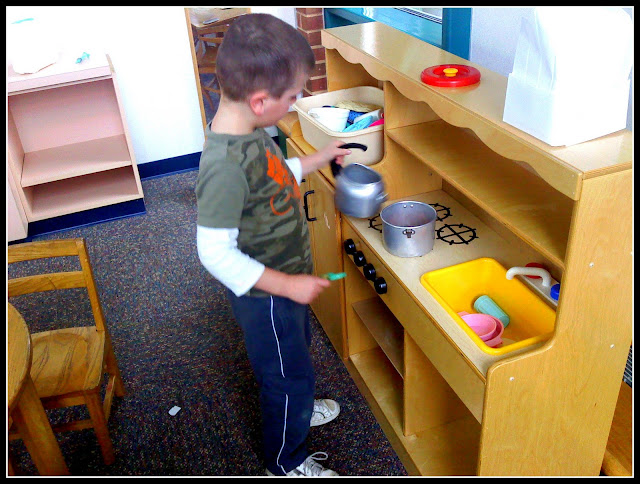 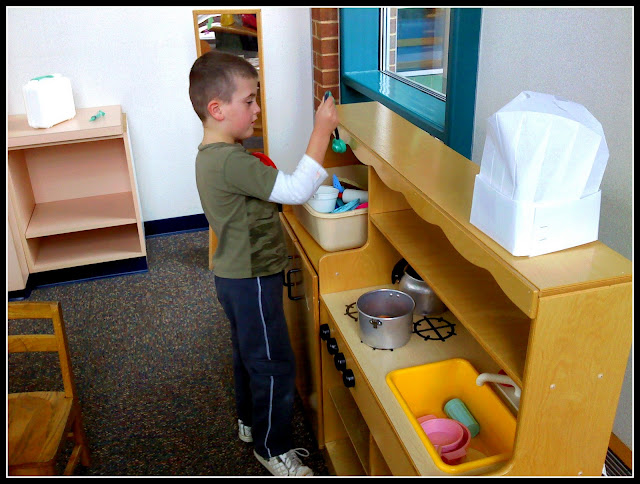 Even though Michael enjoyed the playroom I was really glad when the speech therapist came down early and said she could go ahead with Micheal's appointment. She was really firm with Michael and the evaluation went really well. She was not mean in any way but she made it clear from the beginning that she was in charge. She also gave him little breaks to do what he wanted after he completed what she asked of him.
We were referred for speech articulation concerns but his scores there were in the average range for his age. His understanding of speech fell in the low average range and expressive speech below average for his age. We have the option of starting speech therapy (if insurance will pay for it) or she said she could give us some things to work with him on and let us do it on our own at home. We're thinking at this point we are going to work with him at home and see if we can make some progress.
Having this day completely out of routine really threw Michael for a loop and behavior was a major issue all day. I'm looking forward to a new start tomorrow with a normally scheduled day to help him get back on track. I hope we don't have to deal with this much upheaval every time we go back when weekly therapy starts.
Posted by Rose @ Walnut Acre at 9:21 PM