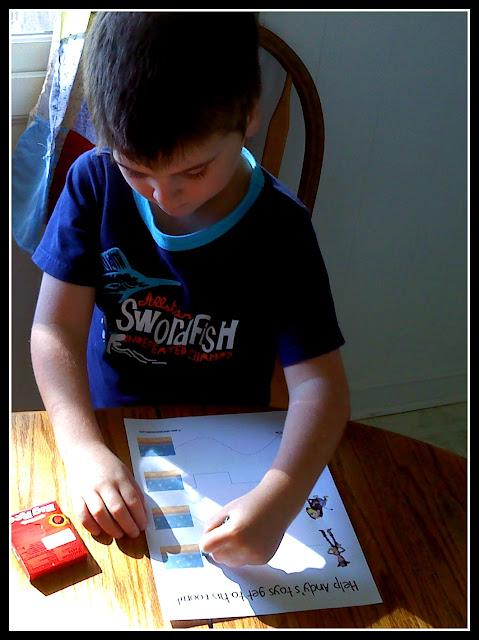 Yesterday was Michael's follow up visit with the pediatrician. Since Michael's last visit to him we had an evaluation at Kluge Child Rehabilitation Center and a medication change.
I feel like there are small changes in Michael's behavior that make life easier on all of us, but we have a long way to go. Of course I am watching gradual changes and sometimes they are harder for me to see than for someone who has not seen him for a month. Dr. J (as the kids call him) said he saw a big difference and was very pleased. Michael was a lot more cooperative in the office this time than the last time we were there. But when we stopped in the rest room on the way out Michael was everywhere, completely fascinated by the touchless water and paper towel dispensers, running them repeatedly and fighting me when I said it was enough, then turning off the lights in the bathroom on the way out. Then on the way home he threw open the van door. Thankfully we were stopped at a traffic light when he did that, but it scared me anyway. I guess he's going to have to sit out of reach of the door handles from now on. I found myself thinking that I wished Dr. J could see him now and wondering what he would say if he did.
But, I do have to agree that over all we are seeing some gradual changes for the better. Making the decision to go the medication route was hard for me and I pushed it off for a long time, maybe a little longer than I should have. I'm not against using medication if needed but I had to know it was definitely needed. So now we're on 18 mg. of Concerta in the morning and .10mg of Clonidine and 3mg of Melatonin at night. The night time medications are so he (and I) can get some sleep at night. Most nights are much better so far although he did have one night this week that he was awake a large part of the night.
Our next appointments are with speech and physical therapy. Those appointments are on Monday and I'm looking forward to the results of those assessments and any recomendations they can give us.
﻿
Posted by Rose @ Walnut Acre at 9:29 PM