Today's 10 Things Tuesday post is all about Austin. He's our oldest and is 15. Actually he'll be 16 next month. It's so hard to believe I have a 16 year old who taller than I am. I'm still surprised when he walks by me and I have to look up at him. So here are ten things about Austin.

1. He loves babies and is my #1 helper whenever a new baby comes to our house for daycare. And the babies love him and seem to know they are safe with him. Here he is with Christopher who has been coming here since he was six weeks old. Christopher is the first person Austin says good morning to when he wakes up in the morning and Christopher is always excited to see him. 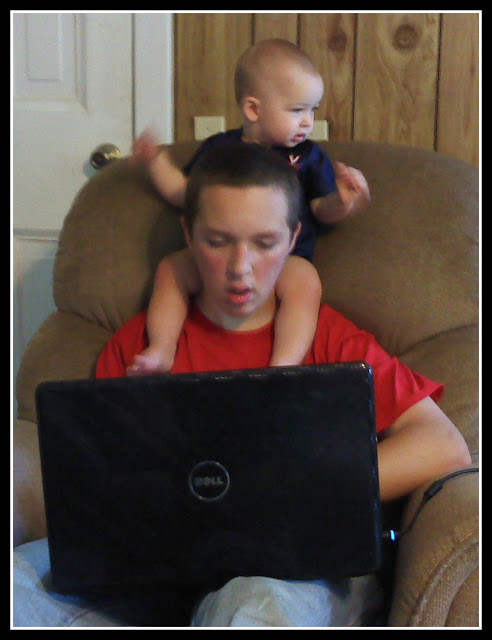 2. He collects coins. He collects state quarters and also collects other types of coins. Any kind of coin that he thinks may be valuable, unusual or rare goes into his collection and he's learning a lot while collecting. He's learning about the history behind the coins and the places they come from.

3. He enjoys building  with K-Nex and Legos and shows a lot of creativity.

4. He's taller than I am now. I'm still surprised sometimes when he walks past me and I have to look up. It's a strange feeling - at least to me. He's enjoying it.

6. He just joined Boy Scouts and is enjoying the new friends, challenges and experiences. It's something he's wanted to do for a long time but for one reason or another it hadn't worked out before.

7. He's active in our church youth group and rarely misses an activity, service or other event. He enjoys the discussions, the activities and the people.

8. He really likes bugs and other creepy crawlies. He even grabbed a snake one time that turned out to be a Copperhead. God was protecting him and he didn't get bitten. But we haven't let him forget it and are constantly reminding him not to pick up a snake!

9. He eats All. The. Time! I'll even wake up late at night and hear him rummaging around in the kitchen. I guess he needs it to fuel all that growing that's making him taller than me.

10. He's a wonderful son and I'm very proud of him and thankful that God gave me the privilege of being his mother.

Email ThisBlogThis!Share to TwitterShare to FacebookShare to Pinterest
Labels: Austin