Walking With the King
Now to Him who is able to do immeasurably more than all we ask or imagine, according to His power that is at work within us, to Him be glory in the church and in Christ Jesus throughout all generations, for ever and ever! Amen. ~ Ephesians 3: 20-21

On Our Nature Walk
We (CJ, Michael, Khristian, Holly and I) went blackberry picking again this morning. We didn't stay out long but we picked enough blackberries for breakfast in the morning and to put some in Doug's lunch. 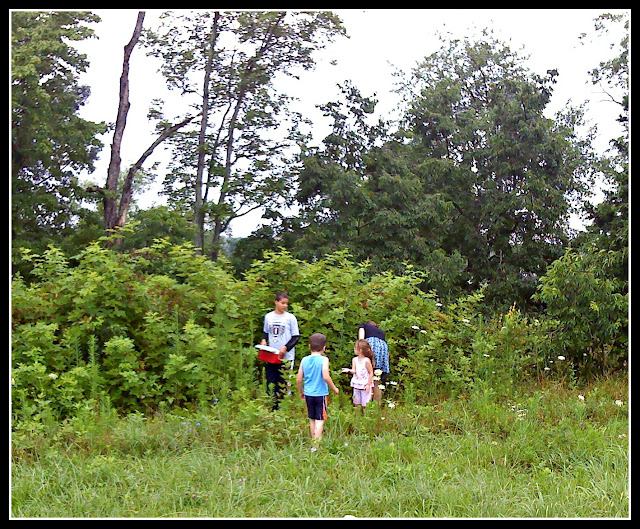 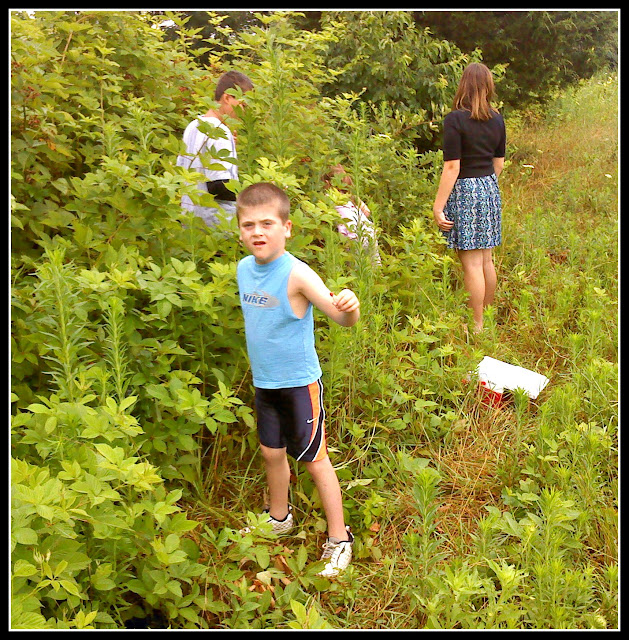 In the Garden
Austin did most of the garden type work today. He watered the plants on the front porch, planted cress and parsley in pots and pulled some weeds.

Other Outdoor Fun
The kids were just glad to get outside and play again after being inside most of last week because of the heat.

We Are Learning
We started learning about dinosaurs today. We read a book, watched a video and played a game. I wrote more about it here - The Dinosaur Life Cycle Game.

We Are Reading
Saturday I finished reading The Mouse and the Motorcycle with Michael and CJ so this evening we started reading The School Mouse.

In the Kitchen
We've had simple meals today - cereal and apple slices for breakfast, sandwiches, carrots and dip and chips for lunch. This was Austin's evening to make dinner and he chose to fix Corn Dogs, tater tots and applesauce.

Homemaking Joys
Basic picking up, a little laundry and lots of dishes was about all we got done around the house today. And Austin washed windows in the playroom and living room.

Out and About
Michael had his six month dental visit today. He did a wonderful job, cooperated well and his teeth are in great shape. On the way home we stopped at the store and picked up a few things. CJ also along and I was so pleased with both boys behavior.


After dinner this evening Doug and Austin went to the Boys Scout meeting. Austin finally officially joined and came home with lots of shirts and the Boy Scout handbook. He's excited because this is something he's wanted to do for a long time and for one reason or another it never worked out before. I'm so glad he's finally getting this opportunity.

Other Notes and News
Amanda spent a LOT of time today working on preparing crafts that kids will be doing this week. Austin got in on a little bit of it but it was mostly Amanda's project. 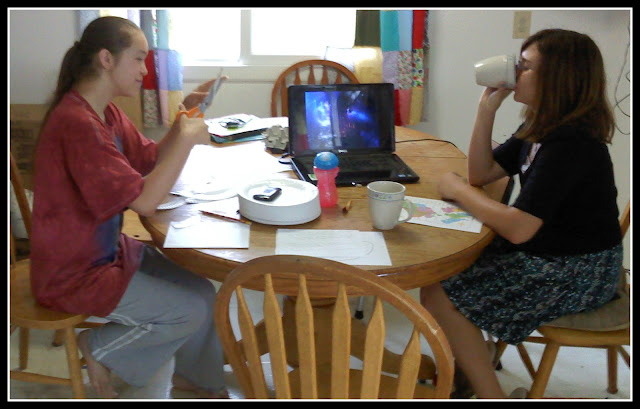 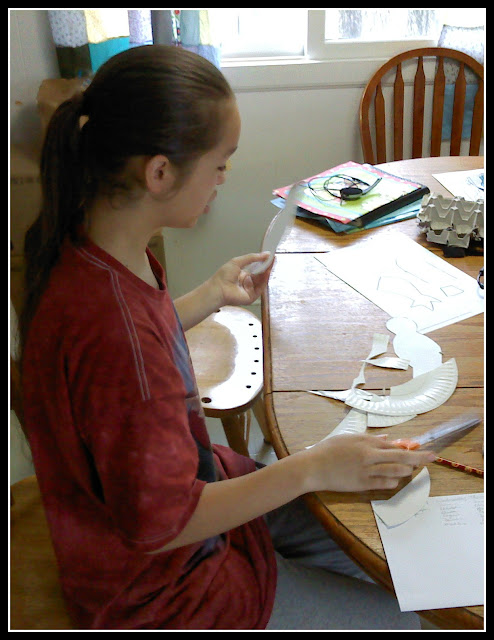 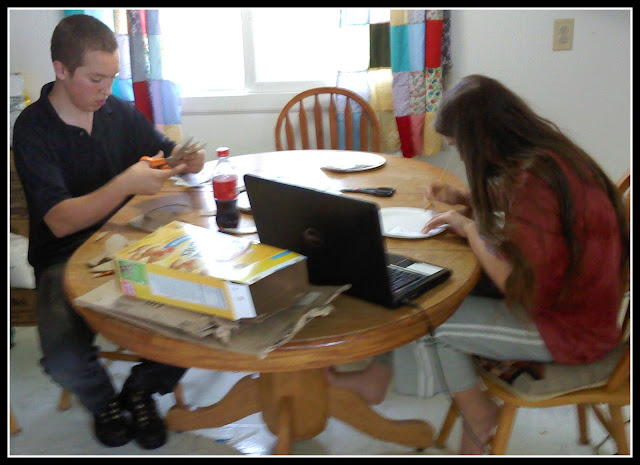 CJ is working on building a table for his room and worked on it for awhile this afternoon. This is mainly his project, and he's figuring it out as he goes. It's learning through trial and error. 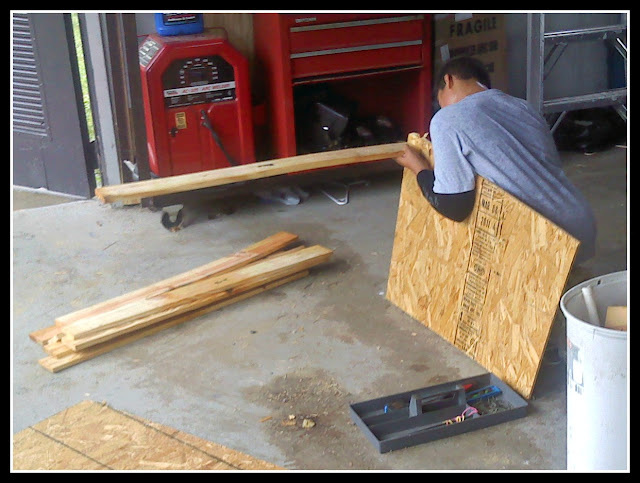 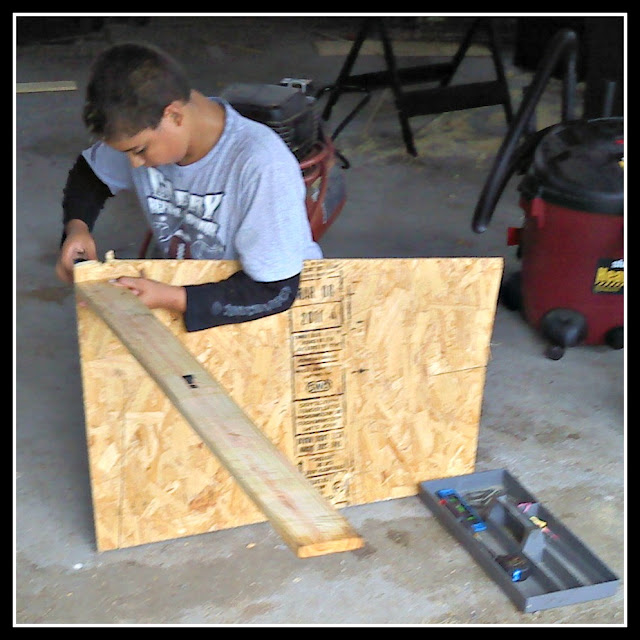 I didn't get everything done today that I had hoped because I was just too tired for my brain to function properly. Michael started making strange noises in his sleep again last night and when I went up to check on him he was in a strange position, rigid and twitchy. I'm not completely sure if it was another seizure or not. I turned on the light, took his blanket off of him because he was sweating and repositioned him so he could breath better and he never seemed to know I was there. Although the twitchiness settled down fairly soon his arms and legs stayed very stiff for over an hour. I ended up staying up until about 1:30 watching him to make sure he was okay. For the most part he seemed okay today although he was very irratable and defiant. One time he came in from outside and sat down on the couch for awhile. When I asked him if he was okay he said yes. Then I asked him if anything hurt and he said his head hurt but that was the only time he mentioned it. Since his dentists office is in the same building as his doctor I had hoped I could get a quick word with the doctor while we were there but wasn't able to. So I guess I'll be calling them tomorrow.


Today's Quote
I always prefer to believe the best of everybody, it saves so much trouble. ~ Rudyard Kipling