Gracious words are a honeycomb,
sweet to the soul and healing to the bones.
~ Proverbs 16:24

We started the our morning as usual reviewing our memory verse ( Romans 8:38-39 ) and our theme song (  I am Special )

We watched He's Got the Whole World In His Hands . . . 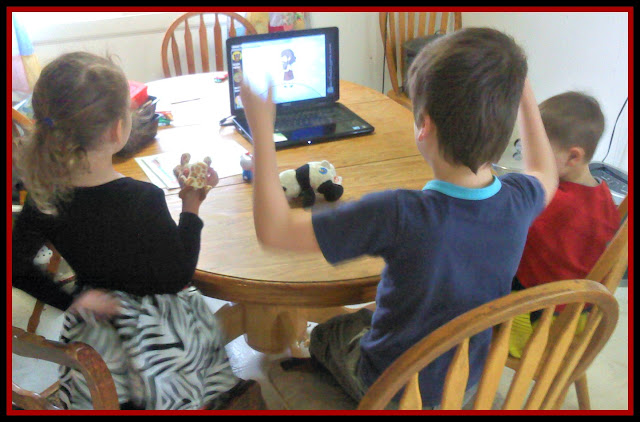 and colored an Earth Coloring Page. 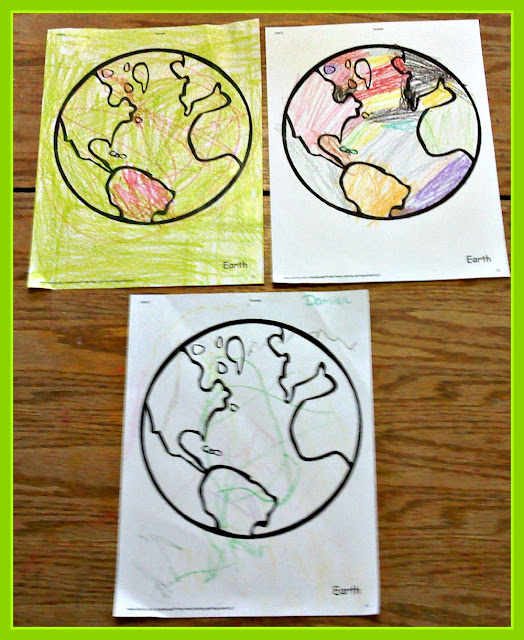 We did the Starfall  online letter Ss lesson and the printable worksheets . . . 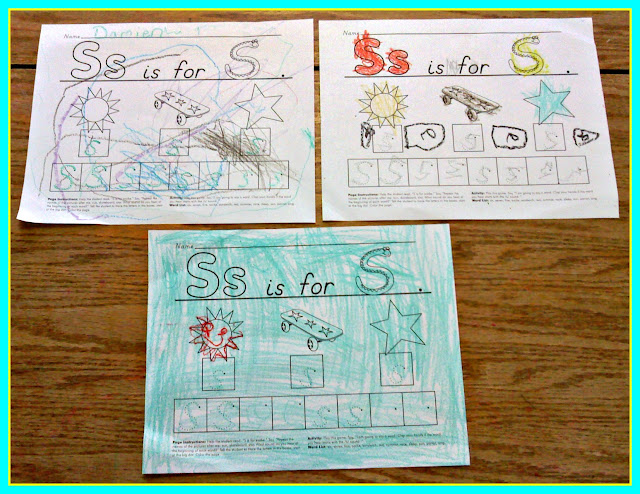 The kids didn't play outside yesterday but today Michael and Mateah were out for quite a long time. Here they were enjoying running through the field next to our property. 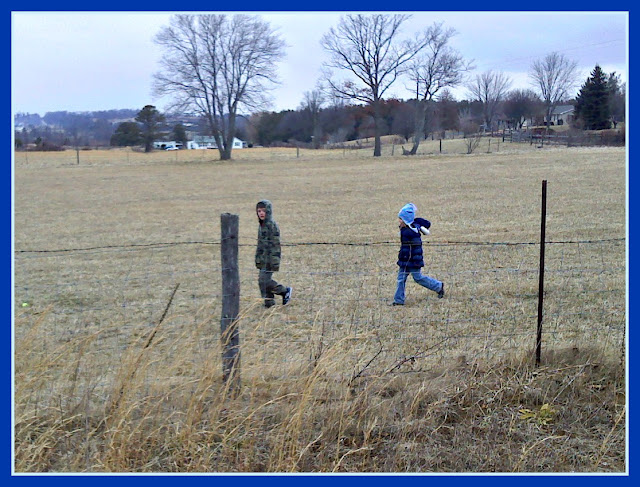 Yesterday we went to get the fourteen chickens from a friend from church. We kept them in a small temporary coop overnight and part of today while Doug and CJ finished getting their permanent coop ready. 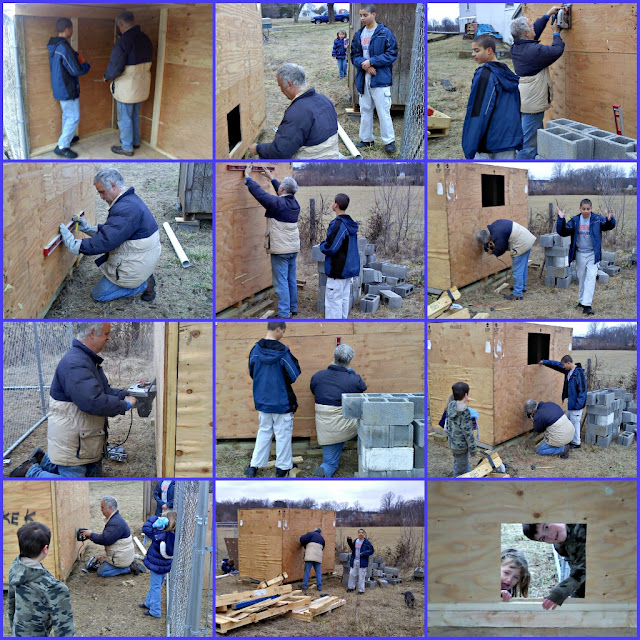 We actually ended up with 13 chickens because the one hen does not like to come inside to roost so was not with the rest when we got them. When that chicken is found and caught it will be given to us. Then, in the process of transferring them from the temporary coop to the permanent one, one of the hens got away and took off through the field. I've seen it outside this evening but haven't been able to get close enough to catch it. Hopefully it doesn't become a chicken dinner for a fox or dog before we can corner it.

Here they are with their new coop, checking out their new space. The five black hens that were our original "flock" look a little amazed at all these newcomers and one hen from each set are working out (rather violently) which one is going to be the dominant hen, but overall they seem to doing well. In the bottom picture I had just given them some old bread and they were having a feast. 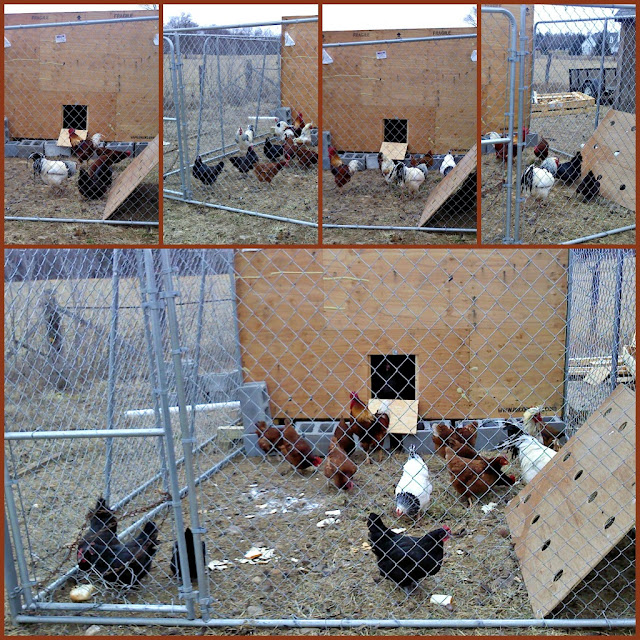 We still have work we want to do on the coop and the outdoor space will probably be enlarged a little. There's another fence panel we can put in to add a little more space. This fencing is also portable so that we can move it around. Doug is going to put little doors on two more sides of the coop so that each week we can move the fencing to a different side to help keep any one area from turning into a muddy, scratched out area. Since the fenced area is a bit small it wouldn't take them long to wear out the space if they were there all the time.

This coop has been a very low cost project for us. We had been using a playhouse for a coop but it was too small for this many chickens and I want to clean it out and let the kids actually use it for a play house. The new coop was originally a huge shipping crate that Doug got from work for free. He has reinforced the inside, largely with wood from pallets that he also got for free at work. The cinder blocks were a FreeCycle find - completely free of course. He did end up buying some wood, but not much, and the hinges for the doors. The fencing is actually a dog kennel that we weren't using for the dog anymore. Twelve of the seventeen chickens were given to us and the previous owner also sent along a feeder and a waterer.

Yesterday was Michael's kidney ultrasound. He did an awesome job - behaved well and cooperated with everyone. The results will be sent to the doctor so I won't know anything for awhile but I'm not expecting there to be any problems. This is just a routine yearly check for him.

Today, while Doug and CJ were working on the chicken coop, Austin, Aaron, Amanda, Michael, Mateah and I did our big monthly grocery shopping. I dread that big shopping trip every month, but when it's over I'm so glad I don't have to worry about grocery shopping for another month. Of course, we still have to get milk and fresh fruit and vegetables and other occasional things, but those things can be quickly picked up when I'm out to take Lauren to preschool. I love not giving up a large chunk of time every week for grocery shopping. 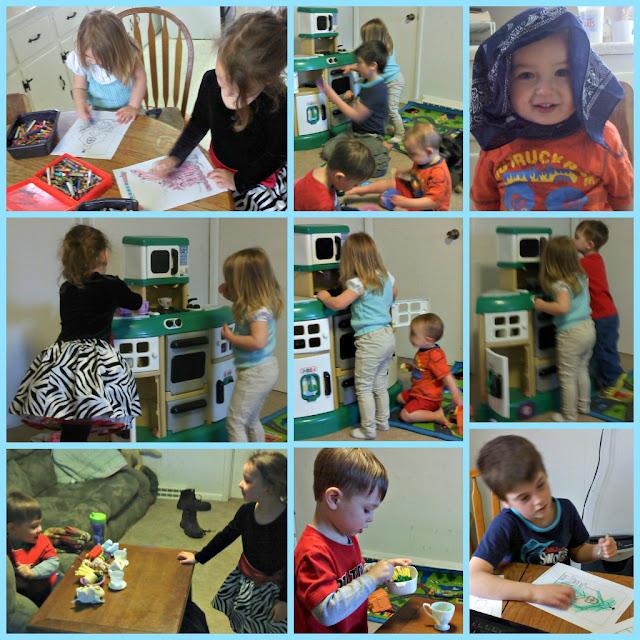 CJ cleaned out the van this morning and did a wonderful job. It's so much more fun riding in a sparkly clean van. 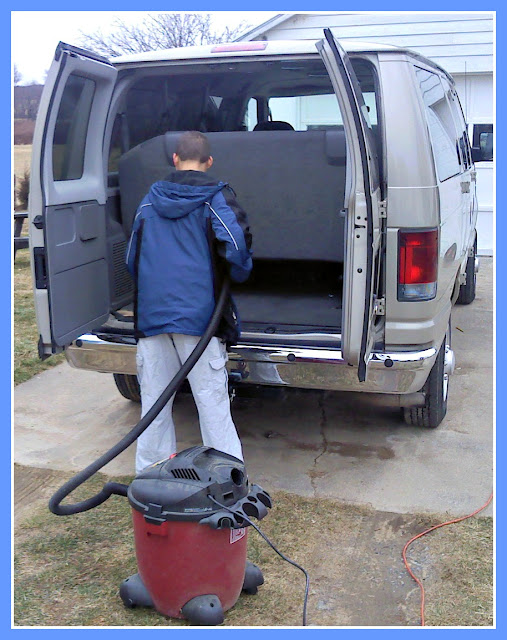 It takes hands to build a house, but only hearts can build a home. ~ Author Unknown