My dear brothers and sisters, take note of this: Everyone should be quick to listen, slow to speak and slow to become angry, because human anger does not produce the righteousness that God desires.

As usual we practiced out memory verse this morning and sang our song. Then we watched the following four videos - The Parable of the Lost Coin, A Wise Old Owl, Adding for Toddlers, Preschool and Kindergarten Children, and the Letter V Song. 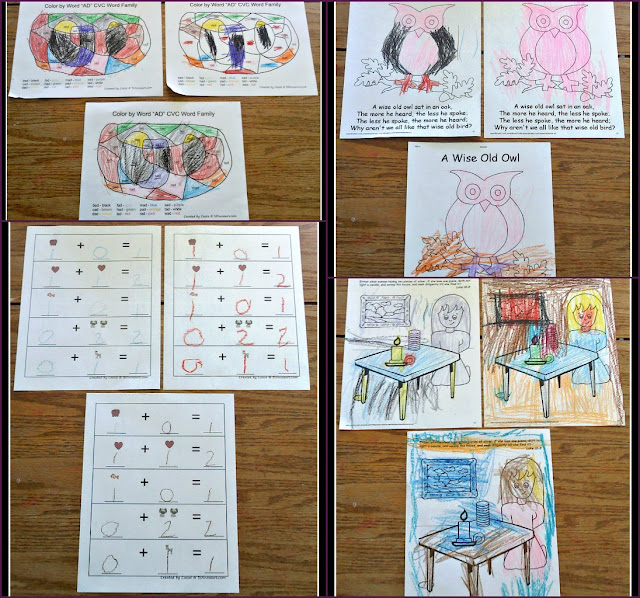 
The first book I read with Austin and Amanda this evening and the second two I read with CJ and Michael.

Amanda made dinner this evening because I had to take Michael to Charlottesville for a neurologist appointment.

Michael's appointment with neurologist pretty much confirmed what I had been thinking. I went with a whole list of notes describing the things we've been seeing. I've done a lot of research and was pretty sure I knew what these little episodes are but I wanted to hear her professional opinion so I was careful not to let on what my ideas were. She feels like the times when he hears things that aren't there or sees things like the walls moving are simple partial seizures. These could also explain some of the seemingly random mood changes where he's suddenly sad and can't tell me what's wrong. The times when I see him stare into space, sometimes with lip movements and sometimes with a strange fixed expression on his face are likely absence seizures. Thankfully in the last few months we haven't seen any long tonic-clonic seizures although I did witness two very short ones while he was asleep. She's raising his seizure medication a little and we'll see if that helps. If it doesn't we may go into the hospital for several days for monitoring to see if they can any more information about what's going on. She also sent us over to the lab for a urinalysis because he has been having very cloudy urine. She's testing for protein in the urine. I don't know what that would mean but we should get the result back for that in the next day or two and if there is a problem we'll go from there.